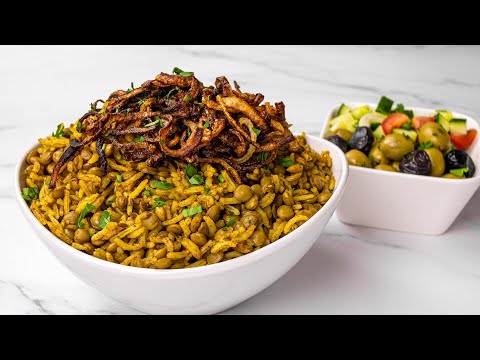 Hi! You need to be logged in to add recipes and foods into your kitchen and increase its vote count. Sign up today for free by clicking on the button below.

It is flavoured with a range of aromatic spices including cumin, cinnamon, turmeric and allspice.

The recipe by Vegan International starts by cooking pre-soaked lentils until they are tender.

This is followed by heating oil and adding the spices and seasoning in a pan before adding in the rice and lentils and allowing it to boil and then cool until all the liquid is absorbed and the lentils and rice are cooked.

Meanwhile the onions are mixed with flour and salt and fried until brown.

Serve the onions on the lentil and rice mix.
Media Gallery

Additional images, videos and blog posts related to middle eastern lentils and rice with fried onions as shared by members. Feel free to share pictures of your own creations using this food or recipe.

Watch Video
in your kitchen?

This recipe is currently saved in 1 kitchen. Saving a recipe to your own kitchen will bookmark it for your future reference. Share your favourite foods and recipes from your kitchen with friends and family.

Hi! You need to be logged in to add recipes and foods into your kitchen and increase its vote count. Sign up today for free by clicking on the button below.

Have a look at other kitchens that have saved middle eastern lentils and rice with fried onions.

There are currently 0 comments. Register to share your opinion on middle eastern lentils and rice with fried onions.

Here are some of the more popular recipes similar to Middle Eastern Lentils And Rice With Fried Onions.

The information provided by MoveForward.com Ltd (“we,” “us” or “our”) on https://myvegankitchen.com/ (the “Site”) is for general informational purposes only. All information on the Site is provided in good faith, however we make no representation or warranty of any kind, express or implied, regarding the accuracy, adequacy, validity, reliability, availability or completeness of any information on the Site. UNDER NO CIRCUMSTANCE SHALL WE HAVE ANY LIABILITY TO YOU FOR ANY LOSS OR DAMAGE OF ANY KIND INCURRED AS A RESULT OF THE USE OF THE SITE OR RELIANCE ON ANY INFORMATION PROVIDED ON THE SITE. YOUR USE OF THE SITE AND YOUR RELIANCE ON ANY INFORMATION ON THE SITE IS SOLELY AT YOUR OWN RISK.
The Site may contain (or you may be sent through the Site) links to other websites or content belonging to or originating from third parties or links to websites and features in banners or other advertising. Such external links are not investigated, monitored, or checked for accuracy, adequacy, validity, reliability, availability or completeness by us. WE DO NOT WARRANT, ENDORSE, GUARANTEE, OR ASSUME RESPONSIBILITY FOR THE ACCURACY OR RELIABILITY OF ANY INFORMATION OFFERED BY THIRD-PARTY WEBSITES LINKED THROUGH THE SITE OR ANY WEBSITE OR FEATURE LINKED IN ANY BANNER OR OTHER ADVERTISING. WE WILL NOT BE A PARTY TO OR IN ANY WAY BE RESPONSIBLE FOR MONITORING ANY TRANSACTION BETWEEN YOU AND THIRD-PARTY PROVIDERS OF PRODUCTS OR SERVICES.